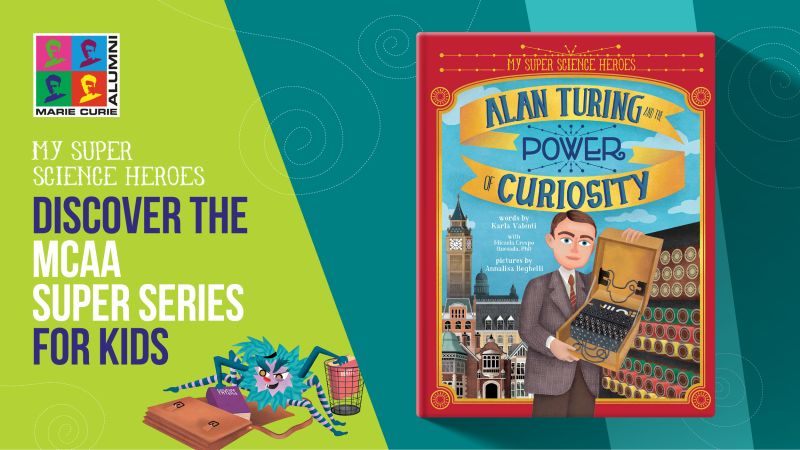 Alan Turing: curiosity is the superpower of the new science hero

Curiosity is the superpower of the English mathematician, logician and cryptographer Alan Turing. He is the hero of the new book of the book collection “My Super Science Heroes” by the Marie Curie Alumni Association (MCAA), following the first volume dedicated to Marie Sklodowska-Curie.

In this new issue of the book for 4-9 years old children, Alan Turing will fight the Miss Enigma, who is trying to confuse and impede him every step of the way. It’s a story about how Turing decodes and solves important questions of his time, but also lay the groundwork for artificial intelligence (AI).

Indeed, Turing was able to crack intercepted coded messages that enabled the Allies to defeat the Nazis during the Second World War. In particular, he is well-known for having decrypted the messages sent by the Nazi’s Enigma machine.

This book is the result of the cooperation between the writer Karla Valenti and the illustrator Annalisa Beghelli. Micaela Crespo and Marco Masia have provided support and scientific advice.

“Alan Turing and the Power of Curiosity” is available on hardcover and digital version on major online bookshops. The full list is available on the My Super Science Heroes online shop.

Initiatives to support researchers from Ukraine